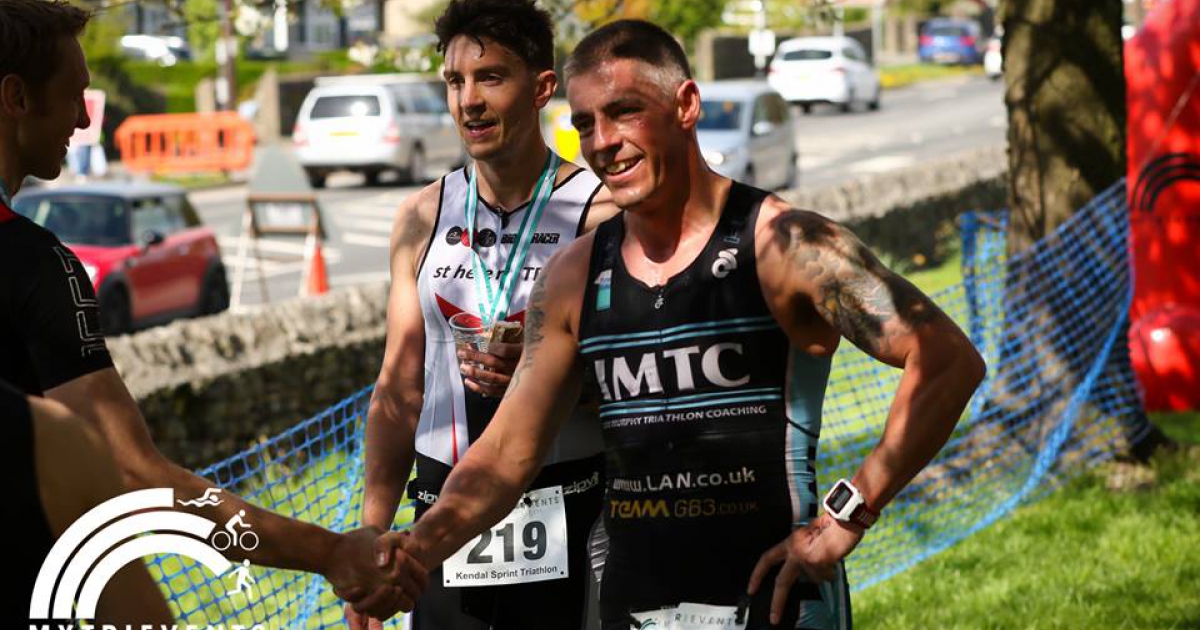 So this weekend I went to the dark side of sprint triathlon!!

A few weeks ago I decided to have a go at a sprint tri to kick my season off, mainly because my coach Ian Murphy was racing with a few of his athletes, so I thought I would go and give a bit of support and dip my toe in too. Those who know me well will know I haven't done a sprint for about 3 years after my last one was a disaster for all the wrong reasons, that's all I will say on that subject. So on a lovely Sunday it was off to the Kendal sprint.

The first shock was on Wednesday night when the swim waves were announced. I was in the last wave with one of my mates Graham Rands who I know for a fact is a sub 5:30 400m swimmer. I officially swim like an anchor so you can imagine my shock and to be honest panic. The first thing I thought might have happened was I must have put the wrong swim time in pressing 5 instead of 6 making my swim time 5:30 not the 6:30 I normally post. Still it'll be nice to swim with the sharks NOT!!!

My fears were confirmed at the swim start when I started to ask around desperately trying to find somebody as bad as me, the best I could do was 6:10. "well this is gonna be really embarassing". The race brief was a blur simply because for the first time in an absolute age I was nervous. Usually I know I've trained hard and I do believe this pays off 99% of the time, but I'm new terrritory here. The only bonus of being in the last wave was there were only 2 per lane so we could take half of the lane each and I had the two loudest spectators in Emily Rhodes and Nicola Wallbank raising the roof. Just a quick one for Emily. Earlier in the day Emily was shouting encouragement at the other IMTC athletes much to my amusement, me saying 'they can't hear you, you know'. Well Em, I'm sorry and I can confirm we could all hear you. xx

The whistle sounded and the hunt for Joe commenced, I was off first in my lane with my lane buddy starting 10 seconds back. My mate Graham was in the next lane and was out of sight after 2 lengths, there were tumble turns everywhere, massive kicks and supurb strokes a plenty, then there was me looking like a wounded duck!!! Still what am I gonna do now. I got out of the pool last, Surprise, suprise, in a time of 6:50 27th fastest swim of the day, Graham swam 5:38.

Now for another new experience fast transitions, shoes clipped to bike, elastic bands in place and just a helmet and race belt to put on. Somewhat different to Ironman, socks, shoes, sometimes arm warmers etc. etc. much slower. Well guess what, I wasn't that bad at it, passing 3 of the better swimmers just mounting the bike one of the quickest T1's of the day.

The weather was great as was the bike course. This is a real honest bike with fast areas some wicked little climbs and technical desents. I found myself in a group of three all riding at a similar pace and legally sharing the work load. What tended to happen was me getting away on the acsents then getting caught on the desents. Desending on the bike is on my to do list, I will be asking for extra training off Ian Who is brilliant at it!! 12 miles and two laps in then it was time to head back to T2 still in the group of three. Question is could I pull off a fast T2 as well, feet on shoes leg over bike hit the ground running don't cock this up. All went well, the noisiest supporters at the race Nic and Emily were still giving loads which was great encouragement. Bike time 33:54 9th on the day. T2 36 seconds.

The run, this is where the pain really started. I found myself in a personnal battle with a young man from St Helens Tri Peter Fairclough. We came out of T2 together and were side by side for the first 2 miles. Normally I would love this but I was in bits, the only thing I could do was sit in behind and hope he broke before me.  We passed a couple more from our wave and were running well. Things got pretty dark for me about a mile from the finish on a nasty little hill where young Peter started to pull away. I always say I can put up with anything for 20 minutes but at this point I was doubting myself, look at the floor grit your teeth and don't let the string break, thats all I was thinking knowing the last part of the race was down hill and thats what I did the calfs and quads were screaming but the string did not break. We hit the downhill and both of us were full on it emptying the tanks so to speak. The funny thing is Peter was only a couple of seconds in front of me but I just couldn't close the gap to get along side, thats the trouble being flat out. And thats how it ended with me 4 seconds behind him. Run Time 19:09, 5th fastest of the day, overall time 1:01:17, so not too shabby for an old dude. (Age card Nic)

The results didn't get posted till late in the day and I got a couple of texts telling me well done etc. I ended up 5th overall on the day and winning my age category, so all in all not a bad day out esspecially after a 20+ hour training week!!

So how did the rest of the IMTC gang get on. Really well!!

The boss Ian Murphy was 2nd in his age cat which considering the lack of time he has to train like he would love to was brilliant so well done boss!!

A special mention has to go to my mate Graham 'the shark' Rands who won the event, it couldn't happen to a nicer guy and I can't wait to see how the rest of the season goes for him, just a shame I'm not doing IMUK this year, I think that could be a real interesting race my mate, Well done

So in a nutshell that was Kendal Sprint, a race I would recomment to you all, tough little course and lots of fun. Next stop Howrich Tri racing for my club Chorley AC & Tri, another tough day after another big week of training, can't wait to see all the local guys for the first time this season.

till then take it easy