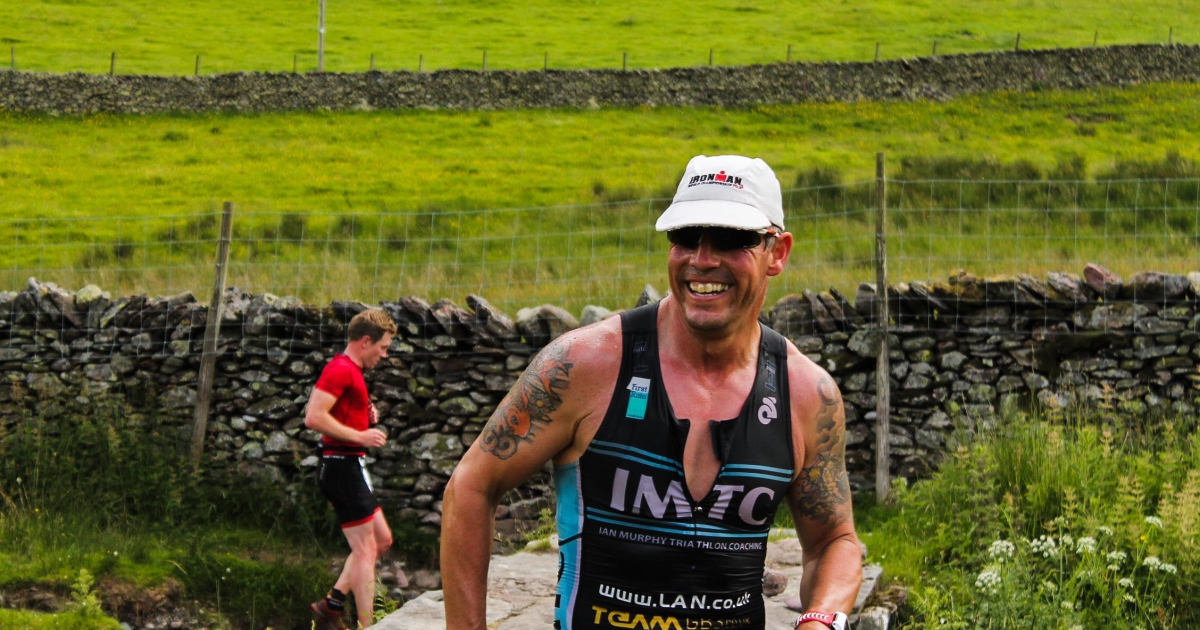 So the photo is a special one for all you doubters who say I don't smile when I'm racing.

If you're reading this then I'm very grateful. This is my first bit of writing since the lung infection back in mid May. I've been very busy with work and family commitments as well as trying to recapture a bit of the fitness I got whipped away from me. Twin this with course after course after course and all the work that goes with them, then you'll have a bit of an idea about the last couple of months. A perfect build up to Ironman UK NOT!!!

But, in true Duck egg style I've put myself out there a few times in the last few weeks in an attempt to regain a bit of sharpness (I'm 45 you know, so maybe sharpness isn't the correct terminology). Here goes the condensed version of events!!

So the weather was dreadful, tipping it down all day. I have developed a strange ability to practically drown the minute any lake water enters my mouth which is proving somewhat troublesome!! that guy Andy Turner chased me all day and its only a matter of time before he turns me over in a race, (keep it up my mate super proud of ya). An official decided to stop me as I was on top of a junction, which totaled a Â£70 tub, cheers mate!!. But the positive was this. I left my Garmin in T1 so rode the whole of the bike to feel. The result; Lap 1 - 1:12:20 Lap 2 - 1:12:21. So I seem to be getting the pacing correct. On the run I suffered like a dog with the breathing and struggled to run any quicker that 7:30 m/m for the first 8 miles. If it wasn't for the fantastic support from Charlene Riley (Andy's girlfriend) and Emily Rhodes (Coach Ian's girlfriend) I'm sure I would have pulled out. But, I stuck at it and for a reason I have not yet figured out, started to run like the fit Joe at about 8 miles. 6:20 m/m seemed normal, go figure!! It was a start.

Now then,  before I go any further with this one it's time for a bit of honesty. I actually should have been 7th here. Matt Nutall from FITT  was actually well in front of me after going down the last descent of the fells like a feckin mountain goat, I swear the guy has hoofs!!! unfortunately for Matt, he decided to take a detour and get lost. Commiserations mate, but look on the bright side, there are plenty of signs at Ironman UK, plenty of spectators and no stupid descents, so if you're struggling and I'm something like fit, I'll hopefully be close at hand to help with the route x. That said this was a new bike course due to damage to bridges with in the lakes. For me personally a better bike course, lumpy but fast. Additionally, they ran a standard distance at the same time which seemed to go well and my good mate Jonathon Mann was 2nd overall, so happy days all round. As for me I only had 1 near drowning experience, which was half as many as the last race, therefore a 50% improvement, but the swim time was OK despite this. The bike was a nice solid bike with a good power output. The run however was a different matter all together. I was dead. Plodding was the best way to describe this to be honest. I haven't felt to lethargic for a long time on a run. But All in all another improvement.

This is a race I enjoy, fast, well run, and loads of prizes. The sun shone the wind blew and I spent all day trying to catch uber cyclist Paul Dotchin after losing 13 minutes to him during the swim and bike. We had a great family camping session with the Welsh's which as always was great fun and Pete showed some true grit finishing in 5:36 despite relieving himself of his nutrition during the run. My race was up and down. I had a poor swim even by my standards and never really got going, three near drowning experiences, but not as extreme as the previous two races so I think this could be classed as improvement!! I had a good bike, feeling very steady throughout and I think I paced it well as I ran pretty well off the bike with a 1:29 half. This was 5 minutes slower than last year though. Still 5th fastest bike split and 2nd fastest run wasn't too shabby!! Paul finished in 5th place. Once he sorts his persistent ankle issues out and can run more consistently without injury it will be time to watch the fireworks, you read it here first!!

So there it is for all who are interested to see. No secrets, no bravado, no bullshit!! a real honest overview of what has happened in the weeks since the illness. How will it go next week? I honestly don't know, I think the swim and the bike will have to be managed very carefully and all the right things will need to be done with regards to nutritional needs. The real issue is gonna be the marathon. I'll certainly be expecting to be really suffering after mile 10/12. So If you've enjoyed this blog then great. Its the bare bones I know, but I have been super busy. Additionally, if you see me really suffering on the marathon in Bolton next week try not to laugh too hard!!!