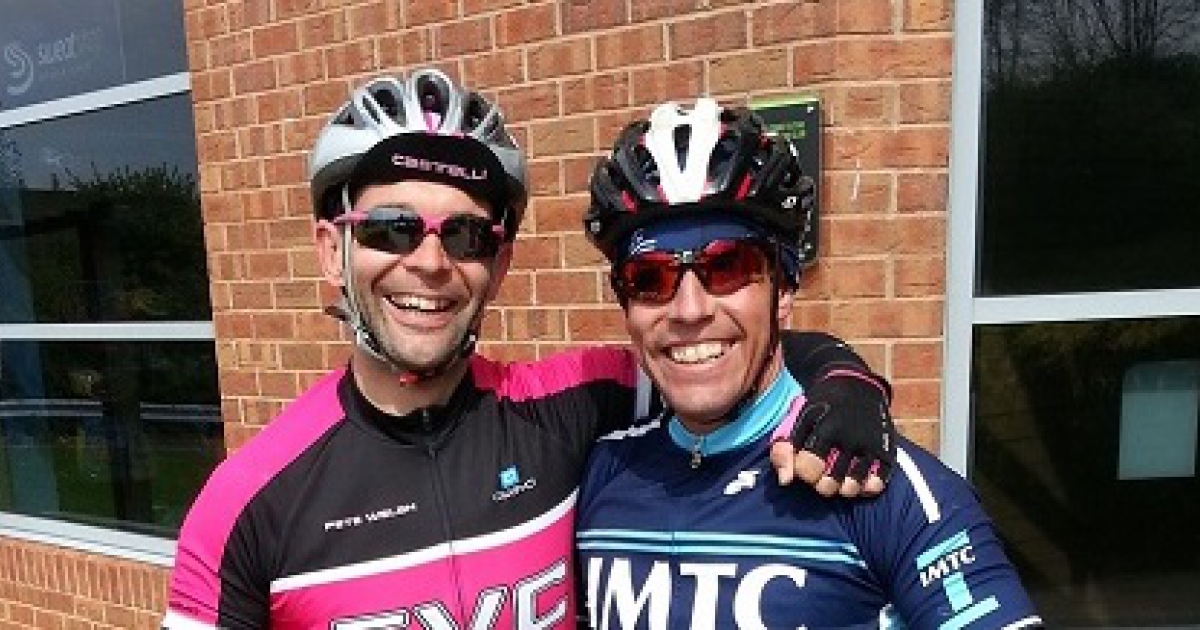 So, after the disappointment of the Howrich Triathlon I had a week to get my house in order.

This started with a nice group ride on Monday, the day after the race. Getting straight back at it was a good thing for me, but more importantly, I was surrounded by friends. To be honest my fragile male ego took quite a battering at Howrich and no matter how positive I tried to be, I was in bits. Enter Pete Welsh, Jonathon Mann and John Baron. The ride on Monday was really about taking my mate Pete around the IMUK bike loop, so he could get a bit of a taste of it, the reality for me was as simple as surrounding myself with friends who are training to achieve similar goals to me and who are going well in training. Within minutes,  literally,  I had forgotten about Sunday and was in love with the sport of triathlon again. The funny thing is Pete was the one thanking me for my time and buying me coffee, when in reality,  I was the one who should have been thanking him, so cheers Pete you're a top man!!!

So the rest of the week was a typical week in the life of a triathlete. EAT, SLEEP, TRAIN, REPEAT. All be it a little less than normal,  as I was on a recovery week. This turned out to be a blessing, as I was still a little sore from my gymnastics debut at Howich.

Onto Sunday and Morecambe. The reason I chose this race was two fold. Firstly the timing with regards to my training plan. Due to the rest week I would be racing quite fresh, as anyone training for an Ironman event will tell you, this is quite a novelty. Secondly it's a nice flat fast course, I really like these sort of half marathons. Oh and that bloke Fogarty wasn't there, so I would see somebody else win a race I had entered, another novelty eh Brian!!

The weather absolutely pants! It was blowing a gale, but, unlike last years race it was dry. As we stood on the start-line a young guy turned up. He was Chinese, wore training tights and a Lancaster vest. He very politely went right to the front of the race and proceeded to carry out some weird and wonderful antics on the start-line (stretches etc). A couple of runners, myself included looked him up and down wondering what this was all about, I'm sure there were a lot of thoughts that were kept to oneself!! With a quick brief from Billy the race organizer we were off and my word our friend Henry Chan (real name) went off like a rocket. My thoughts, 'Muppet there's no way he's keeping that up'.  Within the 400m lap of the pier, our mate Henry had put 40/50m on a group of 4 of us. Not only that, he kept looking at us with a puzzled look as if to say, 'are you lot not joining in then'? The thoughts in the group were he'd never keep that up. At this point we got a rude awakening as Billy the organizer announced that young Henry had just competed at The London Marathon and posted a time of 2:40!!!! Being the shy, quiet type I had to comment. 'Shit the bed we'll not see him till the end lads', funnily enough nobody disagreed!

The outbound 4 miles was fast due to the wind on our back with us all running 5:40 m/m; Henry was still disappearing into the sunset. When we turned however things were a little tougher and the pace dropper to 6:25 pace, however we had a good system going into the wind with each of us taking a turn on the front then dropping into the pack a little like cycling. All was going well until about mile 9 when a little gap appeared between my three shadows and me and a little like losing a wheel in cycling a gap started to grow. What to do in this situation. Easy, dig in, head down and don't let the gap grow to big. My thoughts were that if I kept the gap small, then once we turned again and got the wind behind us I could work to close the gap. This proved to be harder than I anticipated.

As we turned back to the finish, I had managed to keep the gap to 20m or so but this just grew and grew in the last 3 miles, something that shocked me a little. I kept pushing as hard as I could and a last mile of 5:47 proved this, but the gap was too large to make up.

I finished 5th on the day and was 2nd V40 in a time of 1:22:32 some 4 minutes outside my PB. Our mate Henry won in a time of 1:19:11. I feel I have to give a special mention to second place William Onek who was second and Philip Lowery who was 4th. William was competing in his first Half marathon, so 2nd wasn't a bad debut I think you'll agree. Philip won the V50 cat as well as finishing 4th. Inspirational for me in my 40s, I've got a few years left yet if Philip is anything to go by. As for me I won a nice little sports voucher and a bottle of white wine for the missus. Most importantly I had one thing reaffirmed. NEVER JUDGE A BOOK BY ITS COVER!

Have a great weekends training everyone and if you pass a little fella on a Felt DA Time Trial bike on the Ironman UK course, then say hello.